SWARM Layers are a new approach to build powerful learnable set functions. These are multi-variate function over a set (or population) of entities that exhibit permutation equivariance or invariance, i.e. these functions are explicitly agnostic to the order of entities.
Architecture
Building bocks for SWARM Layers are SWARM Cells. These are modified LSTM cells that are augmented with an additional input. Together with the network input x and the previous hidden state h they also receive an input p which resembles pooled information over the whole population. The same SWARM cell (S), shared over the whole population of entities, is executed repeatedly for a number of iterations, where the number of iterations is a model hyper parameter. The pooling operation (P) can be simple average pooling, or any other low level set-invariant function. To build a SWARM based Transformer-like architecture, causal average pooling is used (thereby giving up the strict permutation equivariance, for details see the paper). The iterations plus pooling together with an output fully connected layer form the SWARM Layer SWARM layer can be trained, for example,  to perform amortized clustering tasks, like in this example: 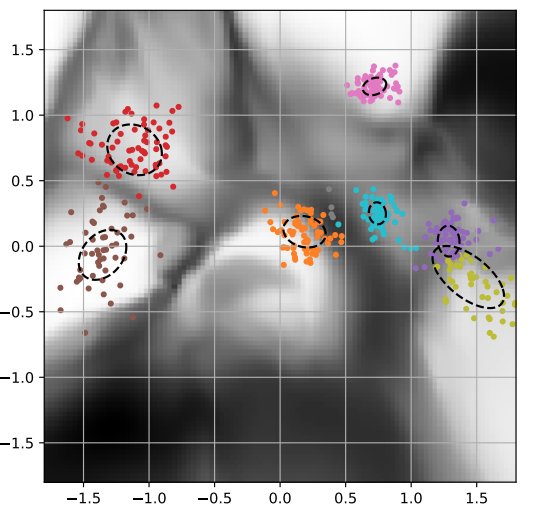 Here, the SWARM layer sees a population of points at once and simultaneously assigns them to one out of ten possible clusters. The grey shaded areas indicate how confident is about it.

A PyTorch implementation of SWARM can be found on Github at